In February of this year Aaron Traywick, the 28-year-old CEO of Ascendance, injected himself with a live herpes virus only to treat it with his company’s gene therapy. He claimed he was “healed” of herpes with his own vaccine. Prior to this, his business partner injected himself with HIV and claimed the same results. Needless to say, everyone thought it was a hoax and too good to be true or it actually worked. He was a bio hacker and transhimanist.

On April 29th he died. He was found face down “floating” in a flotation device in Washington D.C. at SOULEX float spa “in the 1000 block of Massachusetts Avenue at about 11:30 a.m. Sunday. An investigation has been launched into his death, but investigators with the Metropolitan Police Department don’t have any evidence to suggest foul play, a police spokeswoman told The Post.” (https://nypost.com/2018/05/01/biotech-ceo-who-tested-drugs-on-himself-found-dead-in-spa/)

Floating is another way to say he was into astral projection. If you remember the show Stranger Things, Eleven was put into a kiddie pool to go into another dimension, the upside down. “Eleven steps off the gymnasium floor and into the kiddie pool her friends have crafted for her. She places goggles covered in duct tape over her eyes and leans back, allowing the heavily salted water to support her Eggo-filled body.” (https://hellogiggles.com/lifestyle/health-fitness/tried-sensory-deprivation-tank/) 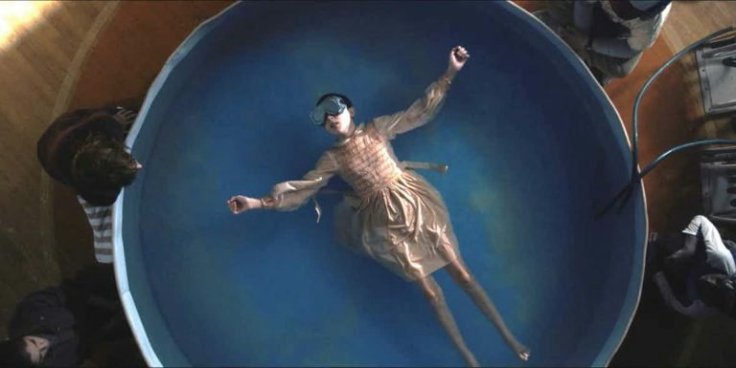 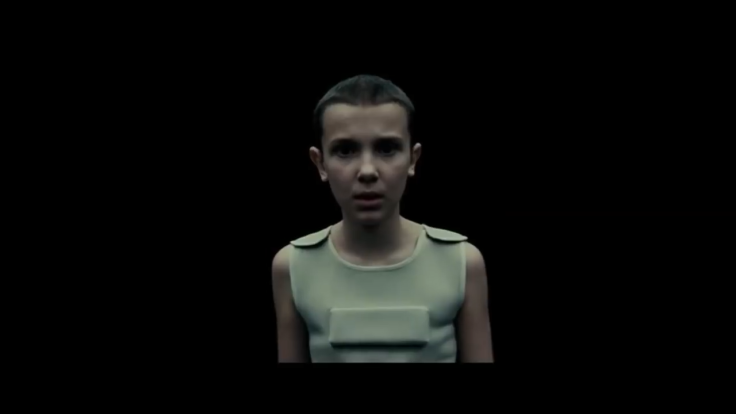 In her case of floating, they called it a sensory deprevation tank. You see this concept of floating on the movie IT. This is brought on by Pennywise with is symbolic of the Nephilim Spirit. The tv show The OA or Operating Angel has The same concept but just with a tank on their head. In The OA it sends her to Saturn’s Cube. In both cases they are sent to compete darkness or maybe I can say “outer darkness”. Scripturally, this is where gnashing of teeth occurs away from the presence of a Just and Holy GOD. The mindset to all of this is the key. It is to transcend to another state of consciousness. This is a demonic concept that sends people to other dimensions only to think they are having a put of body experience or going to another planet. Let me repeat, this is a demonic practice.

“The police department says Traywick’s body has been taken to the Office of the Chief Medical Examiner for an autopsy, but no evidence exists right now to suggest a relationship between his death and the vaccine he injected into himself in February… “Aaron was a passionate visionary. He seemingly never tired as he brought people together to work on some of the most imposing challenges facing humanity,” the outlet reports Roberts said in a statement. “While many in the biohacking scene disagreed with his methods, none of them doubted his intentions. He sought nothing short of a revolution in biomedicine; the democratization of science and the opening of the flood gates for global healing.” Traywick apparently hadn’t been in touch with his colleagues at Ascendance over the past month, according to VICE. Reportedly, the CEO and his colleagues had differing ideas about how to distribute the gene therapies as well as the direction of the company. “We all lost touch with him. It was radio silence,” Andreas Stuermer, a researcher at the company, tells VICE. “It was more than four weeks ago.” (https://www.the-scientist.com/?articles.view/articleNo/52471/title/Biohacker-Aaron-Traywick-Found-Dead-in-DC-Float-Spa/)

What is the history of a sensory deprevation tank?

Back in 1954, John C. Lilly, a medical practitioner and neuropsychiatrist developed the concept for the device during his training in psychoanalysis at the US National Institute of Mental Health. Lilly experimented with sensory deprivation for over a decade, both with and without taking any psychoactive substances — primarily with LSD, which was legal at that time in the U.S. Also referred to as an isolation tank, Lilly pioneered this device, which you can now find all over the world. The tank is a lightless, soundproof container with about 10 inches of highly salted water heated to skin temperature. The high salinity of the water allows you to float effortlessly.” 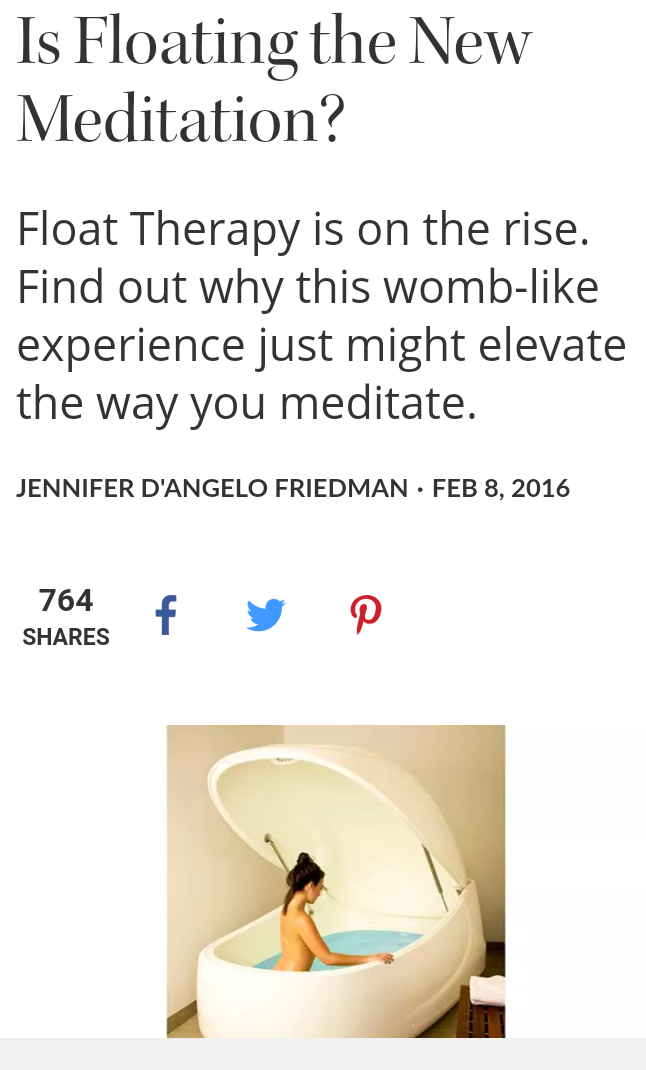 “Roberts tells News2Share Traywick was found in a flotation tank at the spa. The tanks are filled with saltwater kept at human body temperature and close like a clamshell to block out noise and allow deep meditation. “He was found face down,” Roberts says.” So what do they say Floating actually is? ““Floating” is meditation method where an individual places themselves into a sound-proof pod filled with salt water at body temperature, which gives the sensation of floating in empty space. The practice is meant to promote a state of deep meditation.” (http://news2share.com/start/2018/04/30/biohacker-ceo-of-ascendence-biomedical-aaron-traywick-found-dead-in-dc/)

“Imagine stepping into a tub the size of a walk-in closet, adding 1,000 or more pounds of Epsom salt, turning off the lights and soundproofing the room, and matching the water temperature exactly to the temperature of your skin. Now, you’re floating, literally. And this womb-like experience just might be the “new” way to meditate….David Leventhal, co-owner of Lift/Next Level Floats, another float spa that opened last year in New York City, says experienced meditators trying to achieve a “theta” state, or the lower frequency brain waves associated with deep relaxation, visualization, and creativity, may get there very quickly during a float, and newbies may also be able to get there with little effort. “Some of our clients experience a pre-sleep, dream-like state where they couldn’t tell if they were asleep or awake. That sounds like theta.” (https://www.yogajournal.com/lifestyle/floating-the-new-meditation) 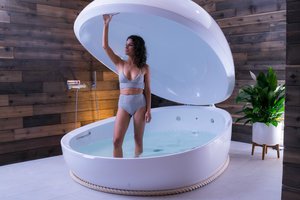 “Lift offers three Evolution Float Pods, which resemble giant eggs with clamshell lids. (There is no pressure to close the lid if you don’t feel comfortable doing so, but the pods are large and not “coffin-like,” as Antioco says they once were in the ‘80s). In these pods, you can control the lighting as well as the music, but most clients eventually turn off both, adds Antioco. They also have two Ocean Float Rooms adorned with lights on the ceiling that look like stars (I chose the Ocean Float Room). You can choose to have the lights on or off in this room, but you cannot control the music. Once the floater is comfortable, Lift encourages everyone to at least try floating with the lights out and the music off to “see where their brain takes them.” Another common concern: nudity. Floating is something you do in your birthday suit, but you’re completely alone with the door locked and the water is clean.” (https://www.yogajournal.com/lifestyle/floating-the-new-meditation) 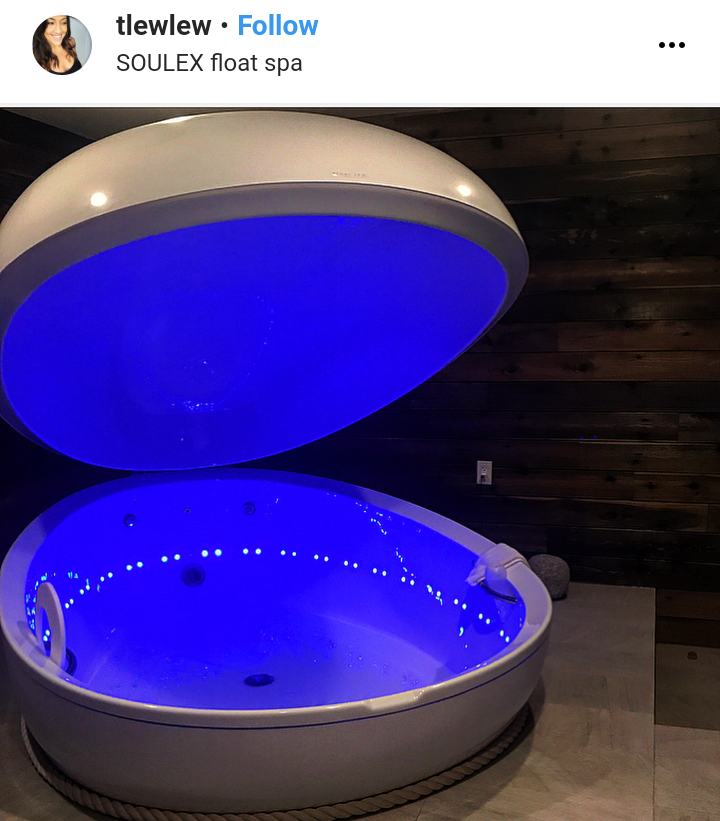 So as you can see, this floating is no good. It’s completely demonic. I want to point out a few things, I want you to notice that this flotation device where Aaron Traywick died, looks like a giant egg. They make sure to tell you that it’s not a coffin and it’s a relaxing event. The interesting thing about this whole story when I read it, is that I’m right in the middle of watching the series Under the Dome. In the series you see the egg concept, you see the Fallen Angel concept, you see a device that they call cocoons that looks like a flotation device, and this all leads to these humans transcending into “greater beings”. Something I’m sure Aaron was trying to achieve. I thought it was strange that one of the main characters in this series named Junior, got the virus and when he got the vaccine to save him it made him worse. And by worse I mean he got super human strength. Transhumanism at it’s best. And noticed how similar he looks to the dead biohacker.

While they’re in these pods, they entered into a parallel universe. They weren’t in there but more than an hour during the show but to them it seems like a full year. They lived lives and were able to “move on” as they call it. This is nothing more but floating or being inside a sensory deprivation tank. And what it boils down to, it is a form of astral projection or an outer body experience that leads people to demonic entities in other dimensions. No one is going to Saturn or Mars or Jupiter like they want to claim. They’re interacting with demonic entities and piercing through the veil.

I think there are only two ways you can go about looking at Aaron Traywick death. He was either right and on to something about this gene therapy, which in itself is bad because it’s mamipulating your genes and DNA (ala CRISPER CAS 9), and I think this was the point that he was trying to make. He was trying to transcend as a human and we see this in the name of his company called Ascendance. So maybe he actually did “heal” himself of herpes with his vaccine and his buddies HIV virus. Mauve the gene therapy worked. And it would make sense that he was killed in this floating device by someone who was threatened by his discoveries. Or maybe he wasn’t killed by someone at all. He was known to push the limits with what he was doing and maybe he went too far? Maybe he died in the floating device at the hands of something no one will ever know? Either way he drowned physically and by the looks of it he drowned spiritually too.

Before you leave, look at the etymology of his name. Aaron: “From Latin Aaron, from Ancient Greek Ἀαρών (Aarṓn), from Hebrew אַהֲרֹן‎ (ʾAhărōn), of unknown meaning, possibly meaning “bearer of martyrs”, or perhaps also, or instead, related to the Ancient Egyptian aha rw (“warrior lion”), though it has been suggested to also mean “elevated”, “exalted” or “high mountain”.” (Wikipedia)

“Jones’ Dictionary of Old Testament Proper Names derives Aaron from the Hebrew word הר (har) meaning mountain, hill (and a mountain is sometimes used as metaphor for a large group of people). From this perspective, the name Aaron is related to the Hebrew names Ararat and Haran. Another way of looking at the name Aaron (as does NOBSE Study Bible Name List) is to follow the Hebrew root אור (‘or) meaning to be or become light.

There may even be relations between the name Aaron and the word ארון (‘aron), meaning chest or Ark (see the name Aran). This word is used for an offer chest (2 Kings 12:10), a sarcophagus (Genesis 50:26) but mostly to indicate the Ark of the Covenant (Exodus 25:10). And finally we note the curious similarity between the name אהרן (Aaron; spelled with the letter ה) and the adjective אחרון (aharon; spelled with the letter ח), meaning hindermost, latter or last. See any of the אחר-names (like Aharah) for more details on this word. (http://www.abarim-publications.com/Meaning/Aaron.html#.Wup5Pp9lA0M)

Traywick: one who comes from a tree farm.

Here are the owners of this “spa”. See if you notice anything? 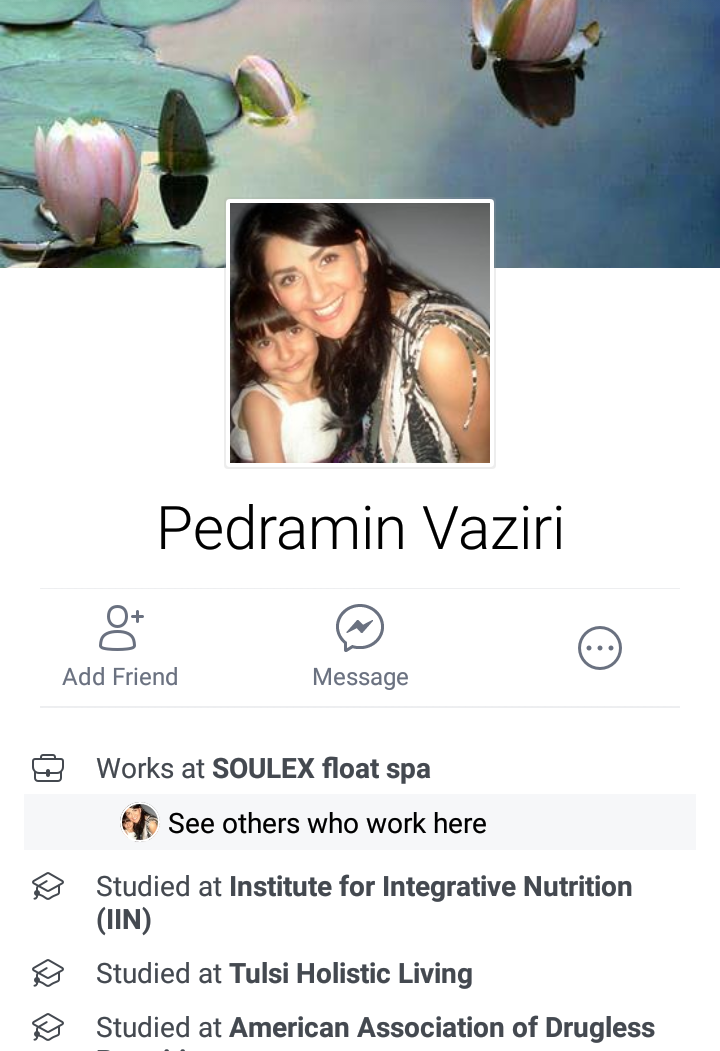 5 thoughts on “The Case of the Floating Biohacker”