So I’m watching the Sunday night football game between the Packers and Patriots and before it even starts there is a woman analyst who brought up numerology. She was using numerology of the number 12 for both quarterbacks. Doing #1 first then #2 then went onto the combination of the two with 12. It was like a sports Tarot reading.

Check out the symbolism behind the numbers. Notice the null symbol? I’ll get to that in a second. 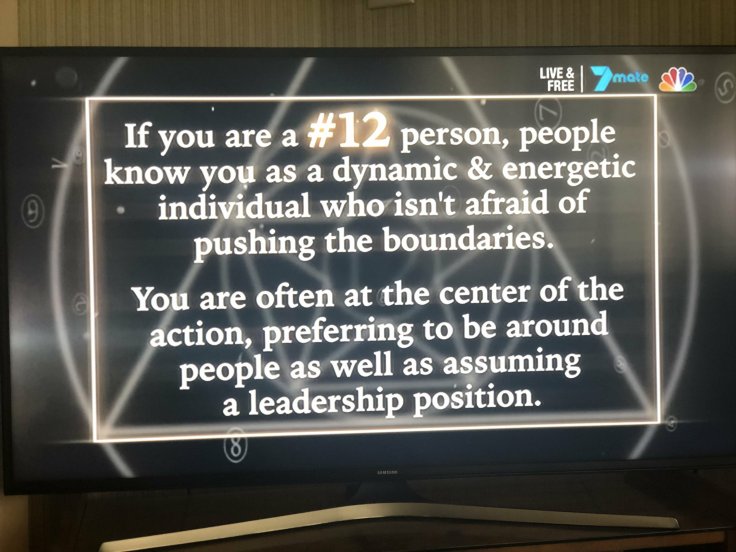 Welcome to the Alchemical NFL ritual. Then Chris Collinsworth said as I was writing this, “It’s going to be a game of possessions“, right then the Green Bay kicker came to kick a field goal. His name is MASON. Lol.

So keep in mind. The Packers wete paying the New England Patriots. This is the same owner who said the above and kissed Tom Brady on the lips like they are father and son.

“What do preparing for the Super Bowl and rabbinic literature have in common? More than you would think, according to New England Patriots owner Robert Kraft.

As Tom Brady and company get ready to face the Atlanta Falcons in the Super Bowl on Sunday, February 5, Kraft spoke with the Forward about his religious upbringing, his relationship with Israel, and what it takes to prepare for the biggest stage in one of the most complicated, strategic sports.

Super Bowl-Bound Arthur Blank on Why Jews Score as NFL Owners
Gerald EskenaziFebruary 1, 2017
“We try to prepare very hard, study very hard,” said Kraft, who grew up in a strictly observant Jewish home and studied Pirkei Avot — Ethics of our Fathers — every Saturday afternoon with his father. “You know, it’s like studying Talmud or Torah — it’s not just simplistic, it’s deep. We prepare as a team very well, we practice hard.”

Now back to the pre-game. Here is a screenshot of the number 12 numerology segment. 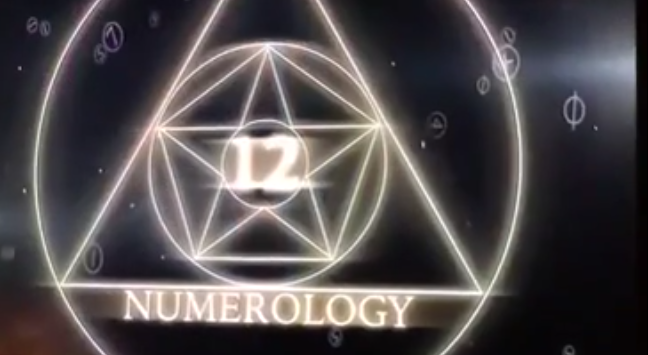 This symbol that the 12 is inside is an advanced alchemical symbol for transmutation. This is something that is about to change into something else. Before we get into that notice it’s the number 12. 11 comes before 12, obviously. I did a op on the 11:11 ritual in Ipswich. 11:11 or 11/11 in the opinions of new agers and witches represents a “reset” of sorts. Keep that in mind.

Now notice that there is a null symbol to the right of the screen. It looks like this ∅. It’s similar to the Greek phi. I did a complete write up on this symbol in context of the 1/9/88 Econimist cover with the Phoenix and the new monetary system. You can find it on my blog here. I suggest you check it out. It is strange they have this symbol representing something empty on a NFL pre-game show about quarterbacks.

Remember, 12 comes after 11 and they think 11:11 is a reset. Does this have anything to do with November 12th reset? I don’t know but it is all strange if you ask me.

The symbol below is supposed to represent “human transmutation” in alchemy. It is really close to what the NFL used on Sunday night football.

Here is the Ipswich 11:11 ritual so you can get what they think about these 1’s.

There has been a ritual going on in Ipswich. They claim it’s celebrating WW1 and they do this weird demonic sound “Clarion Call” over 488 loudspeakers. Those who are in charge of this event have actually called it an incantation and on their FB you can see that their main picture is an upside cross. 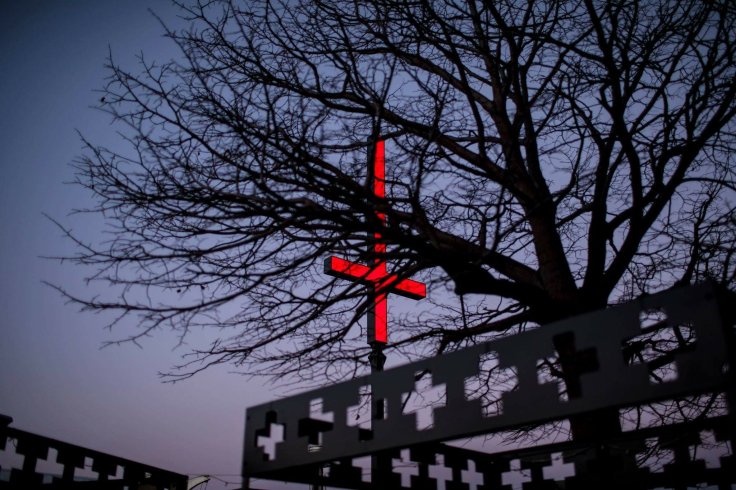 Christian Paul Dawson has been accused of disrupting the event because of his reading scripture over a loudspeaker. He’s not having it and he’s making the organisers and people who are having it mad. The BBC has even written about him. “The protester is calling it a “pagan” event and has been making his views known during the performances. Artistic director Robert Pacitti said it was “enraging and disrespectful”.” (https://www.bbc.com/news/uk-england-suffolk-46071589?fbclid=IwAR3ewP7xCbmu56vxvXB9lVjfqYlj0KCtrBibSCBvsGaIH_iK3uSbbTLe2Sc)

A musical “sonic artwork” commemorating the 100th anniversary of the end of the World War One is being heard across a town’s historic waterfront via 488 loudspeakers.

Singers whose voices have been recorded include Beth Gibbons of Portishead, Elizabeth Fraser of the Cocteau Twins, local schoolchildren and the Wattisham and RAF Honington military wives choirs.” (https://www.bbc.com/news/av/uk-england-suffolk-45982141/ipswich-spill-festival-s-clarion-call-uses-100-female-voices)

The music is based on Shirley Collins’ version of the folksong Our Captain Cried, All Hands

It has been produced in conjunction with 14-18 NOW, the WW1 centenary art commissioning body which was behind the 900,000 ceramic poppies at the Tower of London (https://www.bbc.com/news/uk-england-london-30001177)

The music changes with each performance, using independent sounds from eight banks of speakers

A three-minute version has been played every day since 25 October at 11:00 and an 11-minute version, complete with speakers mounted on a helicopter, is broadcast at sunset. 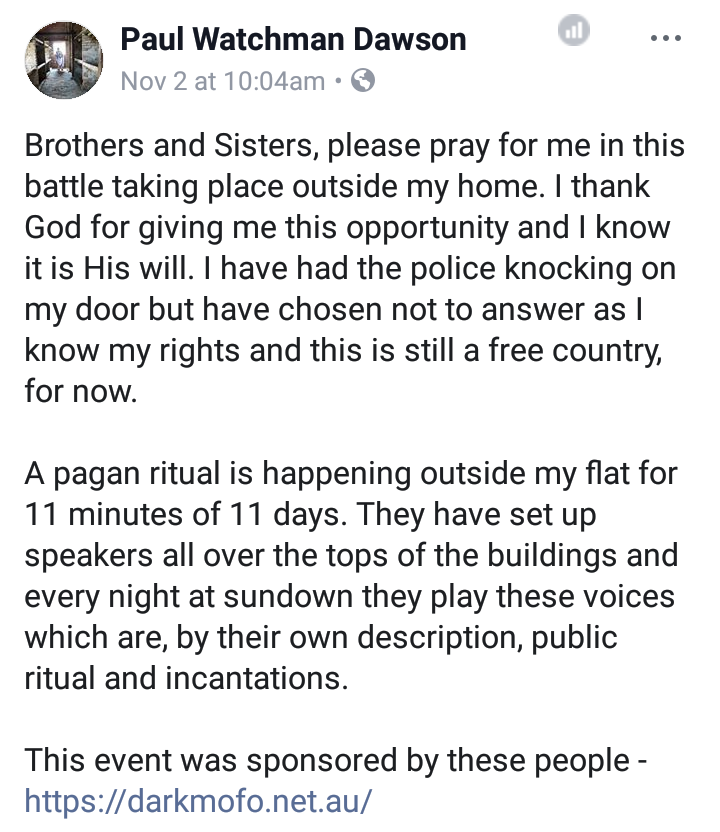 This is from Paul Dawson, the “disrupter”. Go to the link below and watch his video.
“Brothers and Sisters, please pray for me in this battle taking place outside my home. I thank God for giving me this opportunity and I know it is His will. I have had the police knocking on my door but have chosen not to answer as I know my rights and this is still a free country, for now.

A pagan ritual is happening outside my flat for 11 minutes of 11 days. They have set up speakers all over the tops of the buildings and every night at sundown they play these voices which are, by their own description, public ritual and incantations. 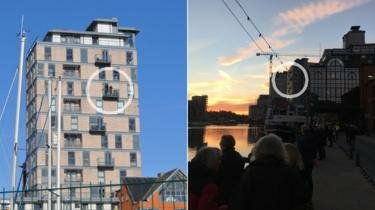 This event was sponsored by these people – https://darkmofo.net.au/

The “artwork” is described as: “The voices of women and girls call to the setting sun in daily incantations, broadcast with audio technology employed for emergency and control, repurposed as a mechanism for public ritual.”

“Incantation” – a series of words said as a magic spell or charm.

Some have called this an 11:11 ritual. 11 minutes for 11 days. 11 represents chaos but witches it is duality in the spiritual plain, and a kind of “reset” if you will. In relation to the sirens (water demons) the number 11 or eleven comes from elve (elf). “11 is known as a “master number” in numerology and represents growth, awakening, and connection to the spiritual. As spiritual adviser Kesaine Walker shares with Bustle, “11 is a master number and a number of spirituality and duality. … Seeing this number is the universe’s way of telling you to leave this material reality alone and dive deep into your spirituality.” (https://www.bustle.com/p/how-the-spiritual-meaning-of-nov-11-will-give-us-all-a-chance-to-cleanse-reset-13058784)

“Eleven is a bridge or connection between our conscious and unconscious realms or the spiritual and physical realms. When one observes the number 11, one will notice the space in between the ones, which is considered a portal. To those individuals on a spiritual path, observing the number 11, in patterns or sequences, can be the sign or confirmation of spiritual awakening.” (https://blackwitchcoven.com/1111-2/)

So what does this all mean? I think it’s just a ritual to them. I kind of see it like this is how they pray. They want to change the atmosphere and ritual and invocation is their way of doing it. Kinda like peeling one little strand of onion layer at a time until there isn’t anything left. Then its game on spiritually speaking. The spiritual being manifested in the physical.

That’s how I see it but hey, I could be way off.